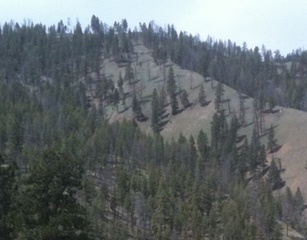 Eleanor Steele Reese was born in 1893 and grew up in New York City where her father, Charles Steele, was a partner of J.P. Morgan. When she finished her schooling, she left the East Coast to pursue a serious musical career as an opera singer in Europe and across the United States for two decades. At the beginning of World War II, she settled briefly in Connecticut, and when her marriage came to an end (she had no children) she went west to start a new life. She never returned to the East, to the wealthy world of her childhood, or to the glamorous world of professional music.

Eleanor met and married Emmet P. Reese in 1941. During the early 1930s, he had left southern Kentucky for central Idaho, the most remote and unspoiled area he could find in the continental United States. He lived an independent life as a frontiersman for several years: trapping beaver, maintaining a small herd of steers in a mountain pasture, panning for gold, occasionally working on ranches, or packing materials into the wilderness area for the U.S. Forest Service. After their marriage, he and Eleanor bought and operated a small working ranch in a narrow mountain valley near Shoup, Idaho, called Pine Creek Ranch, adjacent to the wilderness area. In the mid-1950s, they moved to a larger spread in nearby Salmon, which they operated until a few years before Eleanor’s death in 1977. Emmet died in 1982.

Emmet and Eleanor’s life for fifteen years at the Shoup ranch was simple and strenuous. She helped with the manual labor of building the log structures, cooked for the ranch hands year after year, canned most of the fruit and vegetables grown and used on the ranch, and kept the breeding and business records on their herd of Hereford bulls.

The bull herd quickly became one of the finest in the state, and the Reeses earned their living from the proceeds of their labor. Eleanor’s inheritance remained intact. It was her duty, she felt, to put it to a permanent good use, and after years of pondering how best to support the causes and regions to which she was devoted, she set up the Steele-Reese Foundation in 1955 in honor of her own and Emmet’s families. By the time they died, they had given almost everything they owned to the foundation.

Because the Reeses took more satisfaction in helping others than in indulging themselves, they avoided credit for their philanthropy. The attitude behind their giving was as firm and unsentimental as every aspect of their lives on the ranch: they wanted to help people and organizations help themselves, and they knew that simply giving handouts often weakened rather than helped the recipients.

In developing the Foundation’s grant policies, the trustees and staff continue to work to reflect the personal philosophies of Eleanor and Emmet Reese.

Eleanor Steele Reese created the Steele-Reese Foundation, a trust for charitable purposes, on August 10, 1955. As a matter of legal form, it is a trust and is governed by New York State law. Under Section 501(c)(3) of the Internal Revenue Code, it is classified as a private foundation.

The two individual trustees have the sole responsibility for making grant decisions and they share the investment, administrative, and other responsibilities with the corporate trustee. To hold overhead to a minimum, the Foundation does not maintain its own separate office and it employs no full-time staff. However, Judy Owens assists the trustees in their grant responsibilities in Appalachian Kentucky and Linda Tracy assists them in Idaho and Montana.

Find out more about…